This past weekend was a wonderfully Ragnar Weekend! I finally got to a spot where I could fit in a Ragnar Trail relay to my schedule and it was GLORIOUS! Last winter when Ragnar Relay announced that they would be having a Northeast Trail Run, I just knew this was going to be my only chance to jump into one of these events this year. After checking in with CBW we quickly decided that this relay must be run and that it would be super fun to have a women’s only team (mostly because it would be less drama) and we were right!

As per my normal Ragnar team experience, the team we registered with in December was about half of the actual team that appeared at the event with us, but that is half the fun right?! With one teammate out due to a torn ACL while playing soccer, a second out due to an illness, and a third out because she had qualified for 70.3 Worlds – we had quite the revolution and change out of teammate during the spring months. However, I think it was all for the best since we had an amazing group of women from all over the East Coast (and one from the South/Central part of the country) get together for a crazy fun weekend! AND to make it all the better, we decided to roll with a super fun theme of Alice in er, I mean Ragnarland! (Whoop!)

Ragnar Relay New England was the perfect mix of camping and running through the glorious woods around Northfield, MA. A challenging but not too crazy course and we totally lucked out with an amazing weather weekend (about 50% of the Ragnar Trail relays seem to be a wash out, so I consider the weather a gift from the running gods).

When we arrived at the campground, it was still earlish (9am) but the campsite was filling in quickly. We walked all around the field and assessed the open spaces to quickly decide that we might be better off up on the hill overlooking the site. Luckily, we found an awesome space on the edge of the area with our own little private direct back trail over to the start tent. Seriously, we only had to share it with a couple other teams and the Ragnar Staff that were running in the event. It was pretty sweet.

Speaking of pretty sweet. My friend CBW had an amazing hat. She was fairly adamant th

at we should dress up as the characters from Alice in Wonderland so I quickly assigned her the duty of being the Mad Hatter. She did not disappoint. Seriously, her costume was amazing. In fact, the entire team totally got into it and I think we all had some pretty kick@$$ outfits. Especially KK who joined the team with only 1 week notice and had just completed the Syracuse 70.3 the prior Sunday. She saved our tails from having to run extra legs, AND ended up playing the roll of Team Mom since she brought EVERYTHING we could EVER need for camping. – Seriously. She even had a vacuum! Prepared friends are good to have.

Ok, enough randomness about the camping portion. Let’s talk about the running. Oh the running. I started with the red loop (hardest loop), followed by the yellow loop (moderate) at night, and the green loop the next morning. I honestly really loved all three loops. We had about 2800 feet of elevation over the course of 14.8 miles. So really we were like little mountain goats for part of this relay. Each loop started UP the same path and then split off – with the red and yellow loops headed up the mountain first thing the looping back down. I had zero expectations going into the relay, and 1 focus for the relay. TO. HAVE. FUN. No worries about paces, speed, time, etc. The goal was to complete the relay, uninjured (no twisted ankles, no stubbed/broken toes on roots, rocks, etc.) and to relax a bit out in the woods. This was my break from Ironman training and a much needed break before finishing out my training for Lake Placid. At the close of this weekend, I can say I accomplished my goals.

Ok, back to running. The red loop. This was the longest, most technical loop. It required a bit of patience as you climbed the mountain and reached the summit and then carefully made your way over the path down the mountain before you got out into the grassy trails. I loved it. I have not been able to run trails much this year and I just loved being in the woods, listening to my own breathing, and focusing on where I took my next step. The red loop was 6.3 miles long, with the first 5 miles being out on the red trail and the last 1.3 miles or so being on the track where all three trails came together. The first 5 miles were pretty relaxing since I only saw a few people out there. The last 1.3 miles was fun and fast as everyone came together and knew they were on the home stretch back to base camp.

The yellow loop was my night time run. I knew it went straight up and then back down the mountain. At 4.8 miles, it was a similar experience to the red for the first 3.2 miles of being out in the woods and the grassy trails, a few more people were around since all the teams were out running at this point, but largely you had to just focus on the trail in front of you, focusing on each step. It was so dark and the headlamp really didn’t provide enough light alone. I was very happy for the handheld bike headlamp that KK had brought for us all to us. It really was a lifesaver, even if it was a bit of a pain to carry it. With that loop done, a few of us ended up grabbing beers and heading to the campfire for a while to hang out and chat. I swear, I could do this every weekend. With or without Ragnar. I just need a few friends that want to camp and run. 🙂

After the relaxing by the fire, it was time for some sleep. This is where Ragnar Trail went over the top for me and completely had me falling head over heels. I got 4 WHOLE HOURS of sleep! Usually at a Ragnar Relay, I am lucky to log more than 20 or 30 minutes of sleep during the 30-40 hours of the event. With the combo of just being tired all the time from IM training, plus the fact we had flat ground to lay on and I had no where to be until I had to run the next morning, I was in heaven. Totally passed out from about 1 am until 5 am. I felt like a new woman in the morning!

Finally, the green loop. The easiest loop, yet, my legs were still a little cranky from all the climbing during my runs the day prior (I think the entire team experienced that… and some more than others.) The green loop was about 3.4 miles with about half out on the wide open grassy trails on the mountain and then again the final track into camp. When I hit that final 1.3 or so miles, I was so happy. This was just such a fun event and our team was doing so well. We had all gotten along, we had all enjoyed our running and the challenge of it, and we had only a few runners left until we wrapped up.

It really was a great couple of days and a fantastic opportunity to take a break from all those 100+ mile bike rides and runs on Saturdays and the long long runs I had been doing on Sundays. I took this last loop of the relay course to reflect on how far I have come these past 3 years from when I set out to do my first 70.3 until now where I am training for a full Ironman (something I thought I would never do!). How far I had come from my first real trail race a couple of summers ago, and how much more I still want to experience. It was just one of those runs where you can really reflect and get excited about what you have accomplished in the past and how much more still lies ahead of you in this life.

So, that’s it. A wonderful recovery week, closed out by an amazing Ragnar Trail Relay. 🙂

So, here we are, about a month until Lake Placid and I’m searching for a new bike seat. Good times.

As seen on my run after my bike ride on Wednesday.

I really do live in a beautiful place. I love that my neighbors are horses. 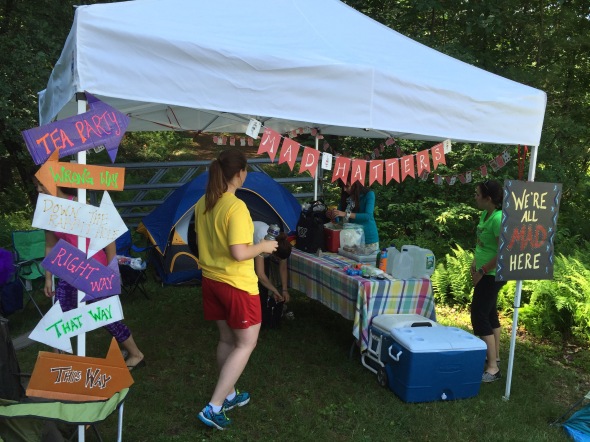 Rocking our costumes before we started on Saturday!

Hanging out at the start line!

Aaaaannnnd we’re off! Love the enthusiasm! (This may be the best race photo ever…. just saying).

Heading out for my first loop!

KK aka the Queen of Hearts wrapping up her first loop!

KC finishing up her first loop. 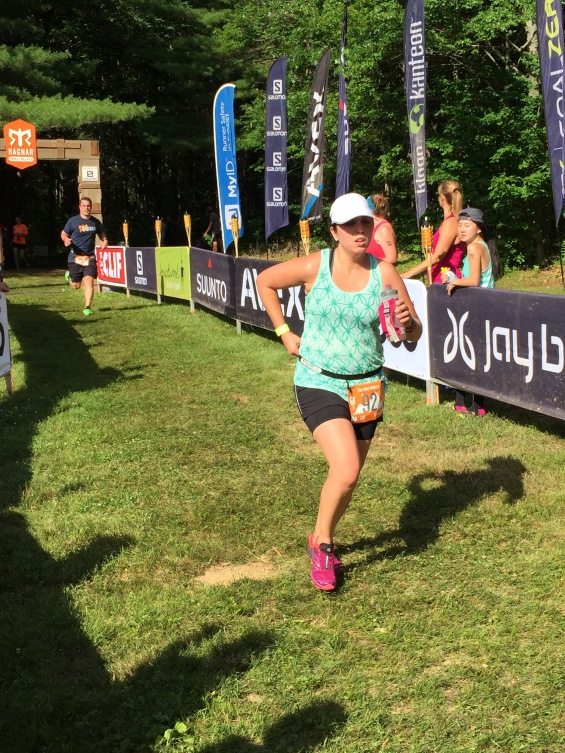 So many tents. Such a beautiful day. So much awesomeness.

Why yes, our campsite also had the added benefit of our own personal built-in drying rack! 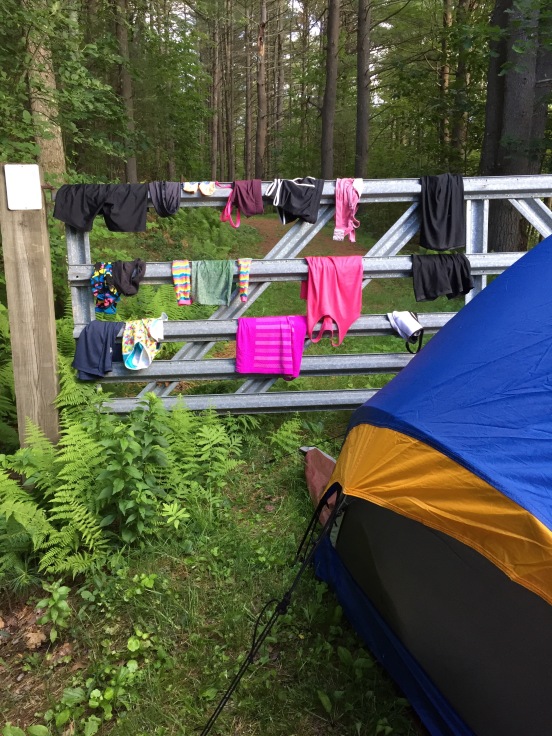 EM Finishing up her first loop!

It may have been about 10 am when this was opened. But hey, that’s what happens when you’ve been running through the night! 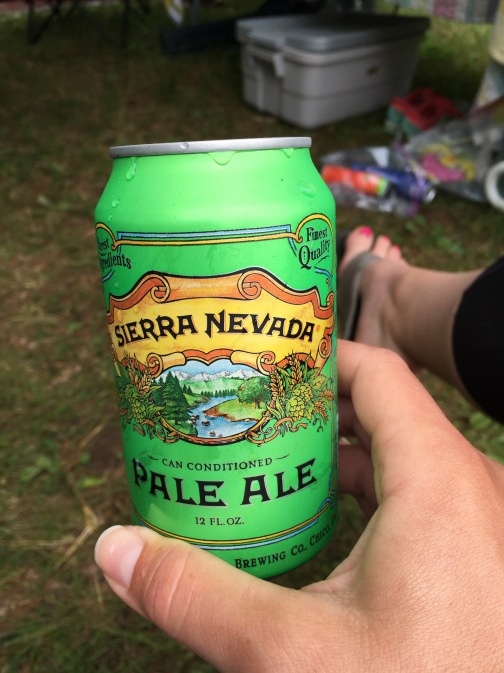 The Mad Hatters at the finish line – yes, we busted the costumes back out!

If you ever have the chance to run a Ragnar Trail relay, do it.

Find some chill people, and just go do it.

I swear, you’ll have fun.

Well, at least as much fun as you allow yourself to have… 🙂