So the last ‘catch-up’ post was getting a little long – lots can happen in 2 weeks! – so I broke it into two…

This past week, I had the opportunity to travel to Albany with my LEAD NY Class to learn more about the political and legislative system in NY. We spent part of a day learning about lobbying and agencies, a morning shadowing a legislator, learning some writing skills, and some conflict resolution techniques. For my shadowing session, I followed Senator Valesky for the morning. He was really nice, and spent the first 20 minutes of our two hour session asking questions about the LEAD NY program, and learning about my background as well as my classmates background. To be honest, I was impressed that he took the time to talk with us since from the moment we stepped into his office, until we left two hours later, it was a whirlwind of activity. Tuesdays are lobby days in Albany, and the Senator had a continual rotation of groups coming into his office. In addition to the groups coming in to see the Senator and his staff members, he also participated in two committee meetings that we were able to witness. It was interesting to see the process, and interesting to see the State Capital building.

After our lobby day at the capital, we had the opportunity to venture out to the local restaurants for dinner on our own. Of course, we did not let this opportunity pass us by and chose to check out one of the local breweries in Albany – The Albany Pump Station, home to C.H. Evans Brewing Company. The food and the beverages were both fantastic! If you ever have the opportunity to stop in here, definitely check out the Pump Station Burger and their fabulous brews!

Finally, as the LEAD session came to a close, we all had the joy of trying to travel in what must have been one of the worst weather days NY has had this winter. Shortly after we hit the road, the State declared a state of emergency for the entire state, but we had no choice but to keep heading West. Luckily, a few snow plows were still cleaning the Thruway, and our two hour trip only ended up taking us three hours – which wasn’t bad considering the road conditions! (A big thanks to our captain M for getting us back to CNY in one piece!) 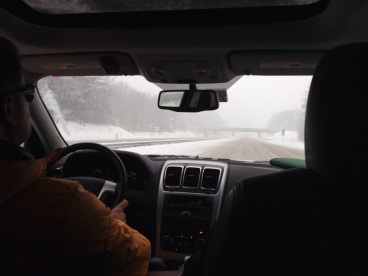 When I got back on Wednesday, after collecting the pups, it was time to catch up on my nutrition class that I’m taking. Bronco was not impressed that this was my choice of activity for the evening… obviously he had other things in mind.

As the week came to a close, my workouts ramped up to some more intense and longer workouts… again Bronco was not impressed on Friday when I came home from work for my 1:20 spin session on the trainer.

And I believe the dogs were even less thrilled when I jumped on my trainer on Saturday morning for my first brick session of this training season.  Two and a half hours on the bike, and half an hour run to close out a three hour workout. Mentally I was not sure how I was going to get through this one. Seriously, two and a half hours on the trainer. Two and a half. This would be no problem if I wasn’t stuck inside spinning in one place. Luckily, my coach was kind and kept the workout moving by switching actives every 10 minutes or so, and I had the awesome pleasure of watching a pretty terrible movie on Netflix. (I would like to know why there are not better movies on streaming…) 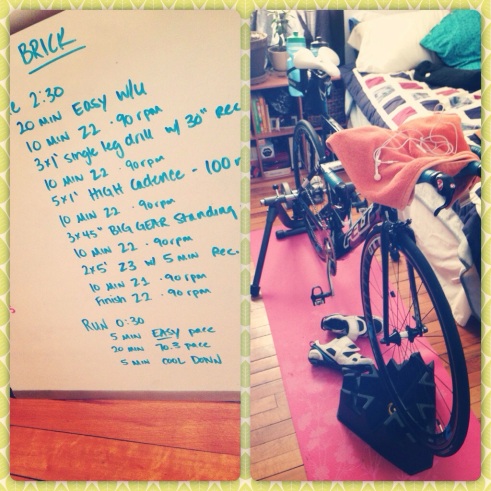 As I finished up the two and a half hour spin session, I then jumped off the bike, threw on some cold gear and braved the 14 degree weather (3 degrees with windchill) to hit the roads for a 30 minute run. This is the first run that I’ve done outside since early January – and while it was a bit cold – it was so great to be OUTSIDE! I really didn’t even notice the cold weather so I must have had my layers just right!

After my three hour sweat session, I have to admit I was pretty much spent for the day. My afternoon was supposed to consist of some downhill skiing, but I ended up working on my nutrition class lectures and baking muffins. I used the America’s Test Kitchen Baking Cookbook for my muffins – they use yogurt as a base, and I substituted Greek yogurt so I had to do a little improvising to get the batter consistency right, but they turned out pretty amazing!

Finally, I got an awesome gift – a Panera Coffee mug. One dollar coffees for me for a year! If you have their mug, you don’t even have to go to the cash register in the store to fill up your cup – just drop in a dollar, pour and go.

And last, just because he’s a goof – here’s one more shot of Bronco. Trying his best to look cute so I might consider him as a candidate for the couch. (I did not. But, as always, good try buddy.)