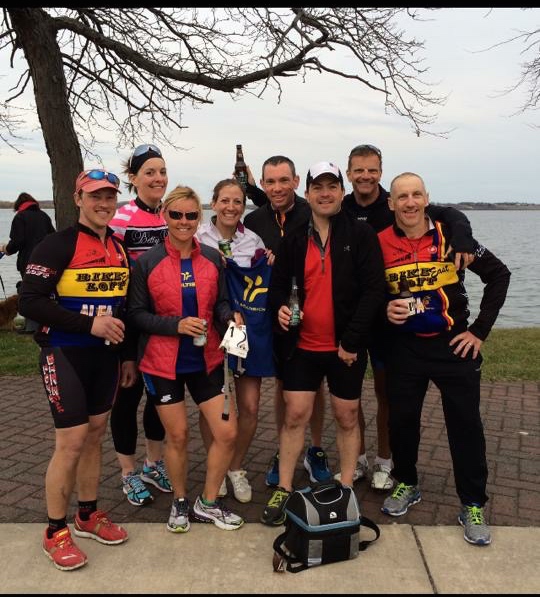 Whoop Whoop. I’m so happy to be posting this only 1 week after the fact – especially since I’ve been on a 3-4 week delay on my posts lately.

So last Sunday I participated in the Seneca 7 Relay for the 3rd year in a row. After my running team finished last year, we decided we had conquered all that Seneca 7 had to offer for our team and we were not going to sign up for a third year – and honestly, I was completely fine with that since I have a pretty lofty race schedule set up for this year with that ever-almightly-timeconsuming Ironman on my schedule in July. However, a few weeks ago, I attended an event at Syracuse Bike and bumped into a couple of my T2 teammates that had assembled a biking and running team for the relay this year. Unfortunately, the captain of the team tore his MCL while skiing a few weeks prior and had to drop out of the event. So as I walked up to join my friends, I was immediately talked into joining the team – and so without much thought, I jumped onto team “Beer and Oreos” for Seneca 7 and I’m so glad that I did! (Seriously, it doesn’t take much to convince me, especially when I don’t have to organize!)

Turns out that biking and running the 77.7 miles around Seneca Lake was so much fun – and honestly I think almost easier in the sense that you never had time to get tight or cold between legs. It did however demand a bit of mental toughness as you neared the end and had to run your last leg… I think it helped that everyone on the team was either currently training for a full or half IM… If you were not running, you were biking and helping to drag the extra bike around the lake. While it made for an almost non-stop day, it was a ton of fun and great training prep for Ironman. All in all, it took our team 10 hours and 23 minutes to make our way around the lake – we hit an 8 minute per mile pace on average for the 77 miles. Pretty awesome!

This year I was runner 5, and while I was definitely not one of the faster team members, but I did have the distinct pleasure of having my second leg extended during the final week so that I became the longest distance runner for the day. My legs/times were as follows:

Clearly I started out my day a bit too fast, and I would say my legs were pretty dead by the last portion of my running but overall I was super happy with my times since I have not done much running in the sub-9 minute territory since my injury last fall. Also, I had the pleasure of taking on some gnarly hills throughout the day on both the bike and my running which was great practice for my upcoming events.

Elevation Chart for the day (Biking and Running):

Now, for the fun part – photos from the day!!

Got to love these guys. 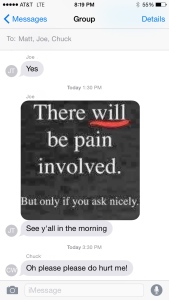 Um, I want one for my house. 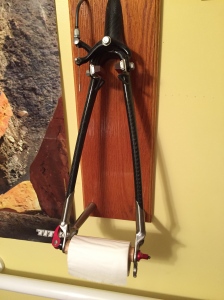 At the start line with Heather and Tayna. 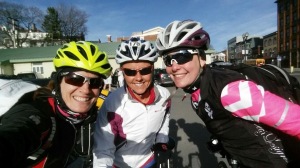 Checking in at the start… 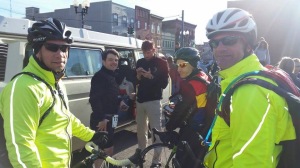 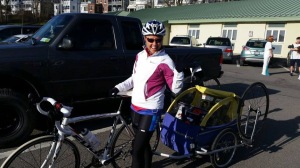 Group Shot at the Start! 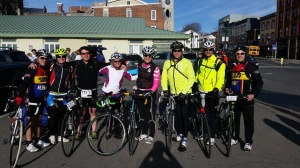 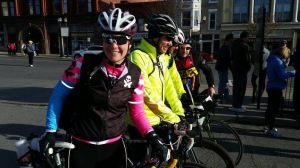 And we’re off! (Note cop car behind us… probably not the best time to take a selfie.) 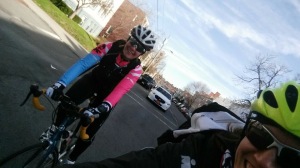 Exchange #1 – figuring out this whole bike on the trailer bit. 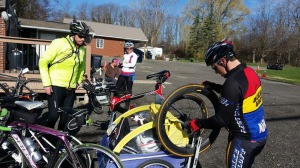 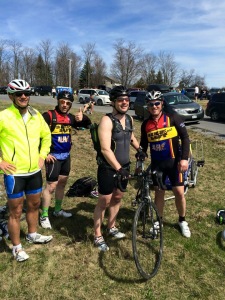 Helping move bikes around while we wait for the runner exchange. 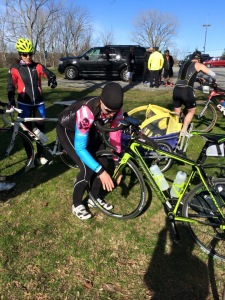 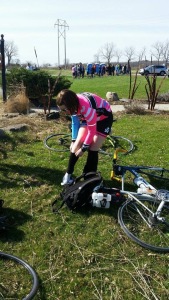 Early in the day and T already had a blister on her toe… thank god for a random person helping with her first aid kit! 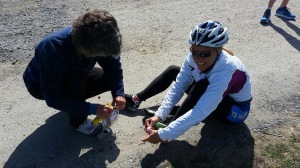 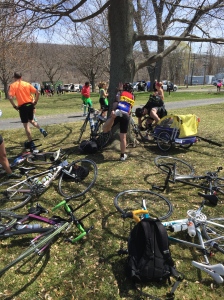 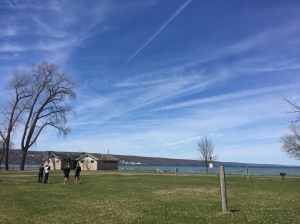 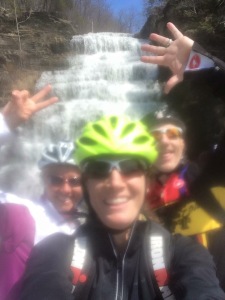 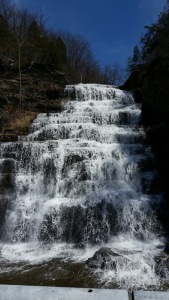 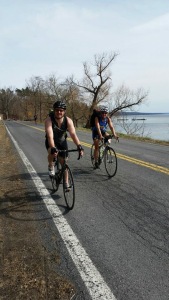 Another shot of the bike trailer and changing the bikes around! 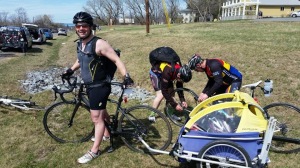 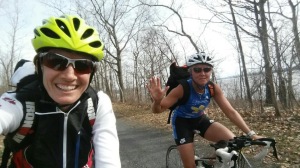 Nearing the end of the day – nearing my last run… 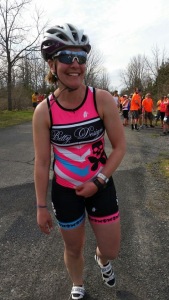 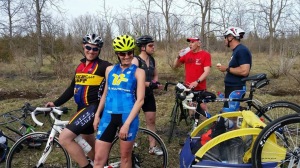 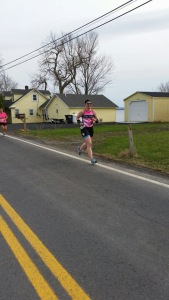 At the finish. Finally racked the bikes for the day! 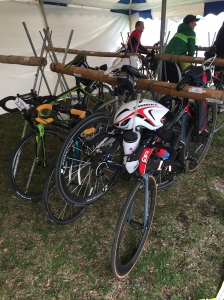 Whoop woop – enjoying the finish with a little Beer and Oreo action! 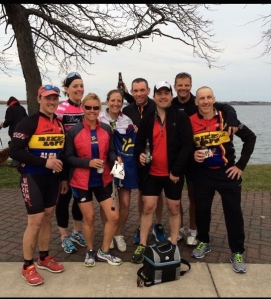 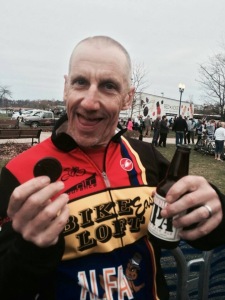 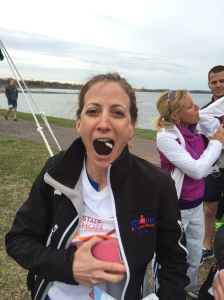 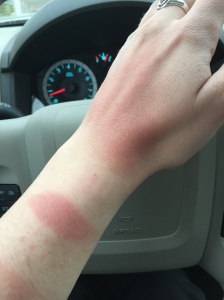 I did manage to have enough time before my second run to get my upper arms and shoulders. Neglected my hand/wrist (clearly) and my legs. Let’s just say the rest of last week was a bit painful as this started to heal… oh and I have some pretty envious tan lines right now.

All in all, I’m so glad I ended up on this relay team with my T2 friends. It was a great day, and I got to practice being on the go for 10.5 hours. I also had a chance to really try out some of my race-day nutrition plan and everything went really really well!

Really the only complaint on the day was the fact that the water that was set out for the bikers was either nonexistent or was empty when we got there. I only have to guess that runners were using it which made for an interesting second half of the day for us as we were searching for water (the course really does not go by any c-stores and is in the country for most of the ride, especially on the second half of the course headed North). Luckily a tasting room at a winery took pity on us and filled up our water bottles, otherwise we would have been in big trouble! In my opinion this race has always had logistical issues with bathroom facilities and exchange points – and while there have been improvements in the past 3 years, there is still a lot more that could be done to alleviate some of the issues.

But regardless of the logistical challenges that come with this race, it was a great day with a great group of friends!

One thought on “Seneca 7 Recap – Team Beer and Oreos!”