Well, I had been working hard to get these posts up each day last week, but fell off the wagon for these last two posts. If you missed my updates on my first few days in NYC and our discussions around food, you can find them here: Day 1, Day 2, Day 3.

Day 4 of our trip we headed out to the North Fork of Long Island to visit a few growers and to learn about the challenges that agriculture faces on Long Island.

Our first visit was to Stony Brook University’s Business Incubator. We met with the 2 staff members that oversee the building to learn about how they are trying to help new food businesses grow and develop into viable longterm businesses.

Essentially, if you want to start a business that requires food preparation, processing or packaging there is a lot of very expensive equipment needed to be able to produce in volumes large enough to sell at retail. Commercial grade (and sized) ovens, coolers, and other equipment is very expensive and often stops individuals from growing their businesses from roadside farm-stands into food items that could be found at the farmers market or retail. In addition to the equipment needed, there are a lot of regulations from the Department of Health in terms of the area in which food prep is conduced, and the FDA oversees labeling requirements.

The idea behind the incubator was to provide facilities to help lower start up costs, and also to provide support from staff to help these start up companies navigate the packaging guidelines and other regulation. In addition to providing these services, the incubator is working to connect local food producers to the individuals with the business concept to try and enhance grower returns in Long Island.

It was really neat to tour the facility and understand how the incubator is trying to help businesses. While we were there, we spoke with Steven Amaral, Executive Chocolatier of the North Fork Chocolate Company. He was making chocolates to bring to farmer markets and outlet malls to sell. The chocolates he was producing were a work of art and used many local ingredients from Long Island.

Next, we headed a bit further out on the island and visited a certified organic farm, Garden of Eve. Garden of Eve is home to a fairly large farm stand, CSA and agriculture tourism site. (Note, picture to the left.)

We met with Chris and he explained the challenges of growing produce on Long Island as well as the advantages. His biggest challenge is land costs and availability. Long Island is a very populated place (although, it actually still had a surprising amount of open land in my opinion), and to be able to expand the Garden of Eve, they would need a crazy amount of money.

Chris mentioned there was a nearby farm for sale – 50 acres, for $4,000,000. That’s about $80,000 per acre! To put things in perspective, farmland in Upstate New York would range closer to $4,000 per acre. AND to make things even more difficult, to be certified organic, Chris would have a 3 year waiting period before this land would be certified and he would really be able to start using it. So, at the end of the day, buying more land is just not a viable option for their farm. 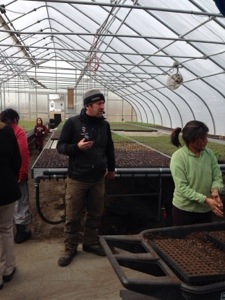 After we spoke with Chris, he gave us a tour of their farm. Since it was still quite cold out, they were just getting ready for the spring planting season. We visited the greenhouse were some planting was going on, and he showed us some of the unique equipment he has for transplanting and weeding crops.  It was pretty neat to see the innovative equipment they had available to them since labor availability is also a challenge that they face.

On the opportunity side of farming in Long Island, Chris pointed to the obvious benefit of having a large population in Long Island and NYC to sell his products to. This is what has helped them become successful, especially as more people want to understand where their food is coming from and how it is produced.

In addition to produce, Garden of Eve offers free-range, organic eggs and has paired up with other producers to offer meat along with their produce CSA. It was kind of neat to see the chickens in their little coops out in the field. 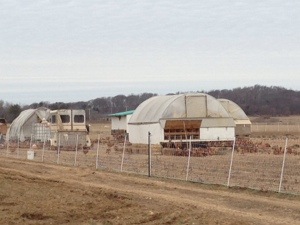 It was also interesting to learn about how the farm keeps their birds safe since there are a number of predators present on Long Island. They have official guard dogs (seriously, we couldn’t touch them – it was expressed that they were not pets!) for the birds that are trained to protect the birds from raccoons and other potential dangers.  Despite the fact that these dogs were not pets, they were still pretty adorable (although I bet that changes when the flock is threatened!)

As with all of these visits, I feel like there is so much that I’m not sharing! If you want to learn more about Garden of Eve, check out their website!

After the Garden of Eve, we headed to the Polish Hall in Riverhead for lunch and to discuss issues around land availability in Long Island. For this discussion we had a panel of speakers including people from Long Island Farm Bureau, American Farmland Trust and the Peconic Land Trust. Again we learned about the struggles that producers have in buying land on the Island, especially those farmers that want to start a new operation. The land costs prohibit many people from trying to start up. One thing that drives the cost of the land up, that many would not consider, is what was referred to as ‘high net worth’ individuals that come to Long Island to start up or purchase equine (horse) farms. (Both Matt Lauer and Madonna were mentioned.) Celebrities and others with expendable income purchase the land at absorbent prices which drives the demand/cost up for everyone else. One way to combat this issue to keep the open spaces utilized for growing food is to remove both the developmental and equine rights from the land which will bring the values down closer to $20,000 per acre – a real bargain as compared to the $80,000, yet still a far cry from Upstate land values!!

Next visit for the day was at the CJ Van Bourgondien Greenhouses. We met with owners Bob and Mark to tour their greenhouses and learns about some of the obstacles and victories that their greenhouse business has been through and where they believe their future is headed. A quick visit to the ‘about us‘ section of the CJ Van Bourgondien website and you can see that the family’s roots run deep in the business, and that they have adapted to a number of changes throughout the years. (Rather than recap them here, I’ll let you go to their website if you are interested…)

Even though the Van Bourgondien family has overcome a number of past challenges, they are currently facing a few more. We discussed the stress that the recession has placed on their business with many people not spending extra money on flowers for their homes, then as soon as the economy started to gain momentum, Super Storm Sandy hit which caused many people to spend their money to replant trees and shrubs that had been washed away. In addition to these events, the family mentioned that a constant issue is working to compete with the larger chains (think Wal-mart, Lowes, Home Depot) and larger greenhouses that ship products into the region and serve the market at prices that are unattainable by a smaller business such as the Van Bourgondien’s.

One thing that has allowed Van Bourgoindien’s to continue is the technology that they employ at the greenhouses. They demonstrated their pot filler and the machine they use for replanting. (I wish I had a video of this to post, it was really neat!)

Additionally, they have modified their greenhouses to allow for large trays of plants to be moved around on a rail-based system. (you can see how large the trays are below.) 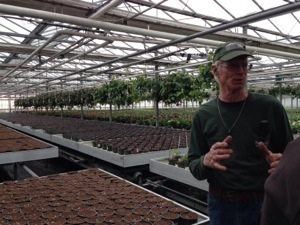 And one thing was certain – they grow some beautiful flowers. It was so nice to see hints of spring after spending a lot of our week touring around in the cold and snow! 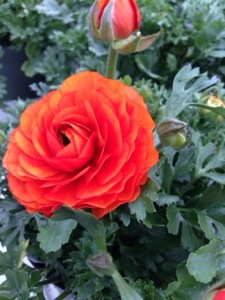 Our last stop on Long Island was Pindar Vineyards. We started our visit with a tour of the facility and learned the methods that the winemaker, Edward, employs at the winery. Similar to our other tours, we had another discussion about the challenges that the winery faces.

Most of this discussion focused on the challenges of regulations surrounding alcohol sales and the distributor network. Additionally, we talked about the general costs of winemaking and the creative ways that Pindar has worked to try and cut costs out of their own process. 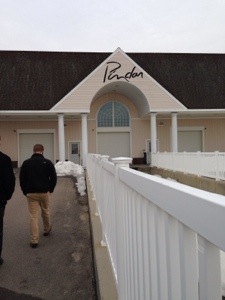 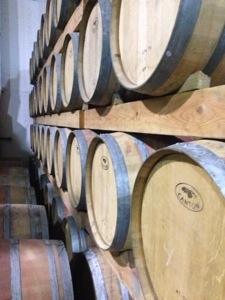 After our tour, Pindar provided us with wine tastings and we had our dinner brought in by a local caterer. It was nice because many of the speakers we had spent time with throughout the day joined us for dinner at the winery which allowed us to learn even more about Long Island agriculture!

All in all, the visit to Long Island was my second favorite day. I was completely amazed at everything that was going on to try and help farmers maintain sustainable businesses in the face of the challenges that are present. Until this trip, I was unaware that Long Island is home to some of the best soils in New York State due to glaciers depositing the soils there.

Long Island also has a large aquifer located beneath it which creates many opportunities, mainly available fresh water, as well as obstacles with battling pollution and run-off from various sources (homeowner fertilizers, golf course fertilizers, suburban runoff of oils and other chemicals, as well as any contribution that farming may have – although due to regulations farmers can tell you exactly how much fertilizers are used, when and where, and what risk of pollution is present).

At the end of the day I did learn that many things are grown on Long Island! I hope you enjoyed my long (yet very short considering all the things I didn’t tell you) post about Long Island Agriculture! 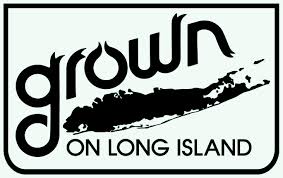