When the team finished, we were EXHAUSTED.  Run, Eat, Sleep?, Repeat!  But, every single person said they wanted to run another Ragnar.  Every. Single. One.  It was great!  We had a blast working as a team to conquer the 200 mile relay – and dressing up as pirates and yelling ARRRGH for the entire 200 miles didn’t hurt much either. 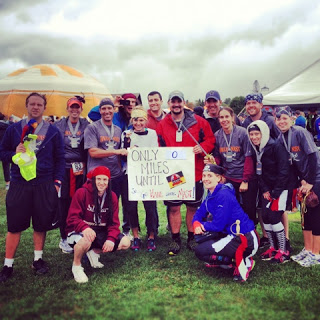 So, we selected Ragnar Cape Cod as our next race.  That’s right, the team returns, or at least a few of us are repeating the experience, but this time we are going to debut at the Cape’d Crusaders – conquering the cape dressed as superheros!

Similar to the last race, we are running into a few bumps getting to the start line with injuries with runners, and a few other reasons (like work) getting in the way of a few of the teammates.  Well, actually this time it’s been even more difficult as we have had a turnover of over 1/3rd the original team, but the Cape’d Crusaders won’t let that stop ’em, we’ve recovered each time we’ve lost a teammate, found replacements, reshuffled running assignments and we continue to soar towards the start line on May 3rd!

Trying to coordinate 12 people, 2 vans, lodging, t-shirts, food, and festivities for this race can get a little crazy at times, but it’s totally worth it at the end of the day (and night).  You leave this race crazy tired, but with 10,000 memories and lots of laughs along the way.  It’s also great because there is no pressure for your race time or pace since the relay has a staggered start, the only goal is to get the team across the finish line!  Oh, plus you get a really cool medal that doubles as a bottle opener.  Who doesn’t love that?