A few weeks ago I was asked to take on more of a national role with my company (read as: more travel) which was exciting and kind of a bummer all at once. Don’t get me wrong, I love to travel and see new places, however when it’s for work and you’re on your own its not as fun, enjoyable or exciting as traveling with friends. Also, it meant that some of the issues I deal with for my job just grew in nature, but again this is the trade off for forward movement in a career right?

Anyway, the purpose of this post really is not to complain but more to recap a few of my observations. Warning, this post will probably be longer than necessary…

For the first part of this week I traveled to Idaho. Final destination was Twin Falls, ID which is nestled in the Magic Valley, the home of some pretty impressive agriculture.

Twin Falls airport is very small, and due to the fact that I only found out about this trip last Wednesday, the closest (and easiest) flight I could get was to Boise, ID. The drive from Boise to Twin Falls was an experience. Five minutes after leaving the airport and getting on the highway, I was in the desert. There was nothing, and I mean nothing. Just flat wasteland that stretched for miles until it hit the mountains in the far (very far) distance……. To highlight the desert experience, about 20 miles down the road, a tumbleweed came flying across the road at my rental car. I’m sad to admit, but this freaked me out. I started wondering what happens if you hit a tumbleweed. But as luck would have it, about 15 miles later I had the fun of finding out what happens. I’m happy to report, not too much happens. It was kind of like hitting a plastic bag floating around on the road.

After the tumbleweed experience, I drove into a plateau region which was then followed by more desert type land but with rolling hills and the first signs of agriculture – beef cows. Then more agriculture started to appear, storage bins, rail lines, and eventually I saw a dairy farm and a milk plant as I drove through Jerome. 120 miles after departing Boise, I turned off highway 84 and headed south to Twin Falls. As I entered the town, there were signs for a scenic overview. I figured I had to see what this scenic overview consisted of and pulled off the highway to check it out. I’m glad I did, it was the snake river (remember fording the snake river in Oregon trail?). The river has driven a path into the desert and has left quite the impressive slice in the landscape.

After checking out the Snake River, I checked into my hotel and did my triathlete duty of forcing myself to run on the dreadmill – actually I’ve been doing quite well lately. Saturday I pounded out 7 miles, I completed a 70 minute ride on my trainer Sunday and I got a quick 4 miles in at the hotel before the masses showed up in the hotel fitness center. (And yes, the masses equate to the 3 other people that showed up, but when there are only 2 treadmills this qualifies as an excessive number of people).

But back to my Idaho Adventure… On Tuesday I was in full work mode. I got up early to meet up with a fellow employee from our mountain region to go out and experience and attempt to understand the western dairy industry. This was my first experience out west and I felt like I should be in Texas (everything is bigger in Texas, right?). Anyways, I couldn’t get over the scale of everything… The milk plants, the dairy farms and even the milk trucks were gigantic. In today’s society, many people may view this scale as bad. I mean 7,000+ cows on a single farm?! How could they possibly know what is going on?? We’ll after spending a couple hours with the farm owner and his brother, I can tell you their cows were as well cared for and attended (or better) to than many smaller dairies. They were very focused on how well the cows were eating, how comfortable they were in the paddocks, in the barns, and in the parlor. I went into one of the four parlors at the farm and I have never been in a quieter or more relaxing parlor. It was amazing. The entire way it had been built and how they operate it is for cow comfort. For those who care, it was a double 50 parallel parlor (for the non dairy people, this means 100 cows can be milked at once). The owners really were very proud of the environment they have created for the animals from the day the calves are born, to the heifer raising facility (group pens for socialization), to when the heifer has her first calf, enters the milking herd and then gets to make her way through the parlor. It was very impressive. If I was a cow, I definitely wouldn’t mind living here.

After the farm visits, I moved on to seeing my customer that just built a processing plant and it was back to Boise for an early flight back to the East coast. All in all, it was a quick but informative trip. I’m glad I finally got to see western style dairying and some of the scale of the milk plants (a small plant in Idaho would be equal to our largest plant in the East). It’s always interesting to me to see how agriculture has developed in various regions. I’ve seen smaller scale, larger scale, and everything in between. Mainly, the various systems are driven by the economic factors that have developed or that each region or country has imposed upon those trying to make a living. I could go into a rant about consumers, producers, regulations, and economics at this point – but I’ll spare you all from that and just leave you with a snapshot of the mountains that I saw as the plane departed Boise. 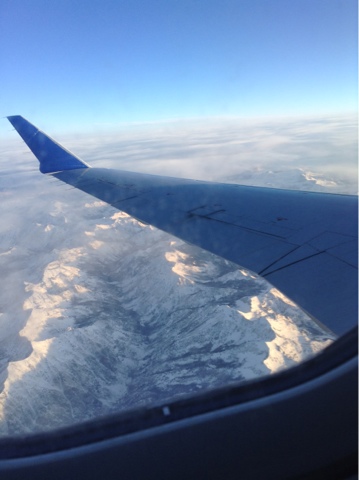 Next stop: Philadelphia and Southern Pennsylvania.